Jet Skiing Without A Hat


“Do you think you should be wearing a hat?” I call to my daughter behind me.

Of course she doesn’t.

My daughter shouts these words from the back of a personal water craft, skimming across the waves in the Atlantic Ocean, somewhere south of Fort Lauderdale. She has never been on a jet ski before. This fact doesn’t stop her from making permanent proclamations about her jet skiing habits, like a Republican disavowing tax increases.

Sea spray splashes my face as she urges me to go faster. She gleefully barks orders as if she was born on one of these things.  Her initial fear has given way to enthusiasm. I cannot say the same. My hand is cramping on the throttle as I try to hold a speed that balances thrills with safety. But I am putting on a brave face for her sake. After all, what thrill-seeking eight year-old wants to think her father is scared?

“Having fun?” I call over my shoulder. 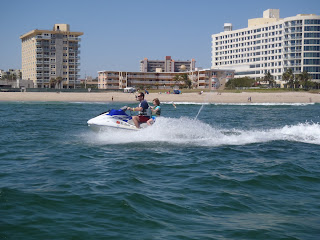 The implication being, I always have fun on jet skis.

I don’t think she is unique in this way, but she does seem to have an unusually strong desire to own her experiences. And the easiest way to do this is to claim to have had them before.

She is not lying, by any strict definition. Indeed, she does not wear hats on jet skis. Just as I do not wear clogs on cruise ships. But that isn’t the point; not hers anyway.

She is letting me know that her inexperience does not invalidate her feelings. Her ideas are good ideas in spite of being brand new ones.

It makes sense, in way. As a child (especially my child), one is constantly being talked down to. Not in the traditional pedantic sense of platitudes and baby talk. But in the more subtle way in which adults presume that their idea or emotion trumps a child’s because it is based on extensive experience. Let me tell you how you’re feeling. Trust me. I’ve been there before. It’s no wonder that an intelligent child might try to stake her claim or, as they say in sports, act like she’s been there before.

Nevertheless, I don’t remember feeling this way. At least, not to this extent. And certainly not this early. I was too busy trying to please people. In my eight year-old mind, pleasing people meant knowing my place, acting my age, and meeting expectations.

Now, as a parent, of course, I want my daughter to have more confidence than I did. I want her to be better than I was, which obliquely involves standing up for herself and embracing her identity while still being penitent, observant, and respectful when appropriate. Seems simple enough?

So my daughter’s simultaneously irritating and entertaining habit of extrapolating a lifetime of significance from a single experience should come as no surprise. She is responding to my bizarre brand of parenting; one that involves crashing recklessly through waves with your eight year-old daughter on a waterborne snowmobile, yet having the presence of mind to worry about whether she is getting too much sun on her face.

In essence, I am constantly telling her to grow up and stay young. At the same time. And she is doing her best to accommodate my wishes.

The irony, inevitably, is that she makes the same unwitting demand of me. Be old and responsible when I need you to be. Be young and fun when I want you to be. When we meet one another’s expectations, the synergy is palpable. Our shared joy at being what the other needs is an essential component of our parent-child relationship. Too often, however, we miss each other’s mark. I am mature and rule-bound in the swimming pool when she wants me to splash and throw her in the deep end. She’s is pouty and despondent during dinner with relatives when I only asked her to make eye contact and be happy. Dammit!

It’s been that way since she was born and I suspect that the pattern will repeat itself for the foreseeable future; alternating between being just what each other wants and something close to the exact opposite. Frankly, it’s exhausting. And exhilarating. She is the reason I wake up in the morning. And the reason I want to stay in bed. Nobody tells you these things before you have children. I suppose it wouldn’t matter. Being a parent is an experience you have to have before you can understand it. But the moment you have the feeling, it’s like you’ve been having it all your life.

Kind of like jet skiing without a hat.
Posted by Jesse Pearson at 10:30 AM