Showing posts from 2017
Show all

September 25, 2017
My oldest daughter couldn’t stop crying the other day, which was surprising. She doesn’t cry nearly as much as she used to. Broadly speaking, this is a good thing. The sound of your child’s inconsolable sobs can cause physical pain; a sonic cocktail of fingernails on a chalkboard, an injured dog, and Richard Harris’s “MacArthur Park.” As a young child she cried often. Rarely did I understand the reason. Even more rarely could I get her to stop. When she wailed, I would experience a gauntlet of emotions, from sad to befuddled to frustrated to enraged. Too often, I heard myself venting to an imaginary parenting coach, “She’s crying for no fucking reason!” Sometime during my parental maturation process, I realized that no one cries for no reason, least of all a child. The failure to understand your children is probably not a failure at all. And if it is, it certainly isn’t a failure on their part. A child’s job isn’t to make itself understood. In fact, I’m beginning to bel
Post a Comment
Read more

August 24, 2017
It must have been 1994 or 5. My ex-girlfriend was home from college for Christmas. We had begun sleeping together again, as we often did when we were both home over holiday breaks. Her mother was living in a one-bedroom apartment on Sutter and Jones in the City. The neighborhood, which later became known as the Tendernob, was a uniquely urban one, bordered by Michelin-starred Fleur de Lys at one end and St. Anthony’s soup kitchen at the other. In between, theater goers in Wilkes Bashford suits and I Magnin gowns mixed blithely with drunks, junkies, and tourists, in a delicate Herb Caenian romance that may never have existed but is clear in the age-enhanced memories of 20 th Century San Franciscans. I climbed those hills, arm in arm with a woman I suspected I would marry, our sweat cooled by Carl the fog. We’d sneak in, close to midnight, through their medievally heavy door at the end of a carpeted third-floor hallway.   Her mother slept on the couch when my ex was home for th
Post a Comment
Read more 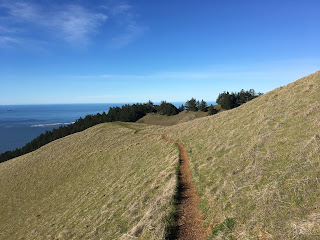 The native brown path bends be endlessly fore me like an infinite serpent. On either side, a tightly woven carpet of winter’s afterbirth in shades of onlygreen, frosted with the downy death of last summer’s meadow. The foamy shoosh of waves a thousand feet below harmonizes with the wind whispering through the oaken hollow, begging me to be quiet and just listen to the sound of nothing, the deafening din of the absence of all that is not me but daily plays the part.
Post a Comment
Read more
More posts