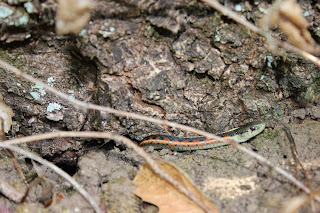 I saw a snake on the WALK today. This is an unusual but not unheard of occurrence. What did seem extraordinary was that I saw him twice.

The WALK lasts one or two hours, depending on a lot of things. I'd been walking for about 15 minutes when I heard a rustling in the leaves to my left. This is different than Milne's "crackling in the bracken," which I also sometimes hear. Oddly, rustlings, though associated with smaller creatures, are always more startling than cracklings. In any event, my eyes caught a glimpse of the slitherer you see pictured at right. Small, harmless, and as we always tell children, more afraid of me than I was of him. He bathed in fog-shrouded sunlight. I admired him for three minutes or so before he sought shelter in the hollow of a dying live oak tree and I went on my way.

Easily an hour later, somewhere along the return leg of the WALK, I heard another rustling and damned if I didn’t see him again! The same goddamn snake, basking in the sun. I couldn't believe it. What were the fucking odds? It's a big forest, at least relative to the size of a snake. It's a long path. Yet here we were, face to face again, like two pieces if driftwood broken off the same Japanese tree winding up next to each other on the same California beach. I was giddy at the serendipity of it all.

As I followed the snake, he made his way toward a hollow in tree. The same hollow in the same live oak tree. I looked around and realized that I was in the same exact spot on the path as I’d been when I’d first seen him.

Suddenly the odds didn't seem so long. He was a small snake. The rest of the path is in the shade. Snakes like sun. Hell, he probably lives in that hollow. How far from home do snakes even go, anyway? How big is a snake's territory? My twin snake encounters had quickly become the zoological equivalent of the Obama presidency; something that once seemed exciting and extraordinary but had quickly become kind of a bummer.

I snapped another picture that didn't turn out as well as the first. I took one long last look into the snake's eyes, trying to read his mind. He looked back at me coldly. And as he disappeared into the tree, I’m pretty sure I heard him mutter, "Chrissssst! Not thissss assssshole again."
Posted by Jesse Pearson at 9:00 PM