The hotter the fire, the harder the steel.

It’s possible I have made this expression up, but searching the dust bunnies that cling to the contact paper of my mind, I seem to recall that it’s an actual saying. I think it comes from the blacksmithy, Medieval, twelve-sided dice world and applies literally to swords forged in fire and figuratively to bonds forged in suffering.

Or maybe it doesn’t. But I was reminded of it (or made it up) on today’s WALK as I took note of all the lichen and moss along the path. As mentioned previously, the first half of the path is in the shade. Bay trees, redwood, ferns, and huckleberry are everywhere. Enough to bring a native plant lover to climax. (Dear God. Maybe that’s not lichen!) And nearly everywhere you look, there is some kind of growth clinging to a branch or spreading over bark. It looks like the dermatology ward at the tree hospital.

Moss and lichen remind me of one of my best friends. I’ve known him for 24 years. I trust him completely. I’d do just about anything for him. And we have virtually nothing in common. His is a moss-ologist, meaning he has a PhD in mosses. He lives in Denmark. Unless something’s changed, he gets high almost every day. The truth is, we haven’t spoken in about a year. We haven’t seen each other in two years. He is an abysmal correspondent. Yet I never question the strength of our bond. Never doubt the permanence of the relationship. 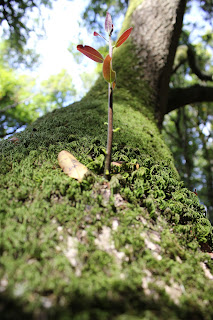 We met in high school. I was miserable at the time, in the way that only high school kids can be miserable, and I’m fairly certain he was, too. We had little in common then. He, the oldest of three kids, an urban dweller, the son of a union iron worker dad and a peach-pie-making mom, bookish, awkward, and frighteningly smart. Me, the only child of a divorced parents, a suburbanite, rebellious (within reason), athletic, underachieving, and lonely. We spent seven out of the next nine years together, counting the three years when we were in the same college town. Sometimes we were closer than others. But the misery and joy we endured together, and at each other hands, became the basis of whatever the hell we have now.

Pausing to examine some hairy looking moss on a dying live oak branch, I thought longingly about my old friend. I do miss him, but it is absence that does not threaten.

I’ve met many people in the years since our paths diverged.  New friendships born of out of shared interests, shared professions, or kids sharing the same pre-school. I have more in common with any one of these people than I ever did with my old friend. These new friendships are easier. Life is easier now. And with ease comes weakness.

This is not a lament or some pathetic plea for things to be the way they used to be. I’m a guarded optimist when it comes to new relationships. But I sometimes suspect that they’ll have to get a lot more difficult if they’re going to last.
Posted by Jesse Pearson at 9:07 PM