Notes from today’s WALK (as inspired by Eckhart Tolle, and the inspired Dana Gould Hour podcast)...

Here’s how I know I’m making progress. When I was younger, like a hundred hack comics before me, I envied dogs’ ability to lick themselves. I would think, “Do you know how happy I would be if I could do that!”

Now I’m older and I no longer envy this about dogs. I envy that while they’re licking themselves, they’re not thinking about the laundry that needs folding. They don’t lap blissfully at their testicles while wondering if the car needs an oil change or if the rejection letter they're expecting is in the mailbox. Dogs live entirely in the moment. They are fully and only conscious of what they are doing that second! Nothing else ever creeps in.

That is what I'm working on. I practice turning off the ego voice; the self-judging, shame-based story about not being good enough, not doing enough, not working hard enough. When that voice is silenced and I am in the moment, I feel fleetingly at peace.

I am getting older. My bones ache even when I exercise. My muscles become less limber despite a stretching routine. I am farther away than I've ever been from being able to lick myself. But I think I’m getting closer to being fully present to it if I could. That’s progress. 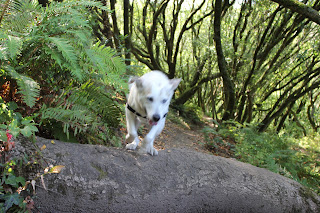 Which reminds me of a tired but wonderful old joke. Two guys are staring at a dog that is licking himself. One guy turns to the other guy and says, “Man, I wish I could do that.” The other guy says, “Maybe if you scratch him behind the ear, he’ll let you.”

I’ll be here all week folks. Don’t forget to tip your waitress.
Posted by Jesse Pearson at 9:03 PM